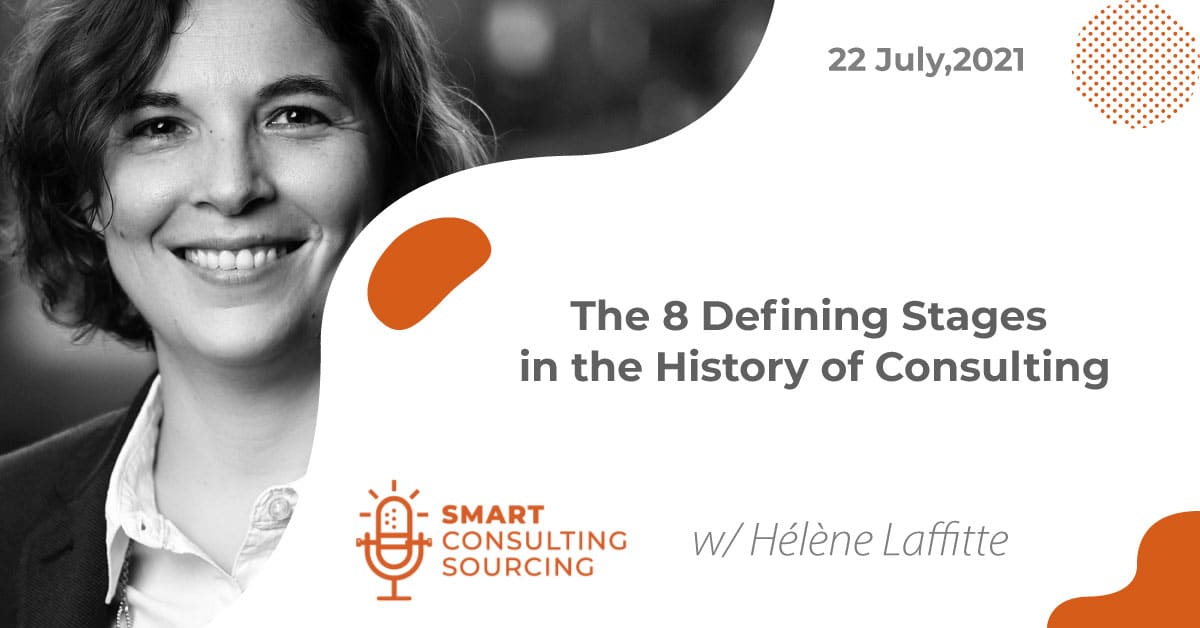 The History of Consulting goes way back. Indeed, consulting has always existed. We can trace advisors to decision-makers back to the Antiquity. How old is Consulting?

On this week’s Smart consulting Sourcing podcast, I tell you a brief History of Consulting.

Key Takeaway: The contemporary phase of the History of consulting started in the late 19th century and early 20th century, when the first need for Work Rationalization emerged and is generally viewed as the beginning of professional Consulting as we know it today. The History of Consulting is still ongoing. As clients have started to better understand what value consultants can bring them, many changes will shape the future of the industry: Brexit, Covid, remote working…

Hello and welcome to episode 53 of our podcast: Smart Consulting Sourcing, THE podcast about Consulting Procurement.

My name is Hélène, and I’ll be your host today.

Each week I’ll give you the keys to better use, manage and source consulting services.

This week, I’ll tell you a brief History of Consulting

Last week, I reviewed The 7-High Level Consulting Capabilities That Every Client Should Know

We saw that the consulting market is diverse. Each one of these capabilities is divided into many sub-categories in which some niche consulting firms thrive. And capability is just one of the many dimensions to describe the industry…

The History of Consulting goes way back. Indeed, consulting has always existed. We can trace advisors to decision-makers back to the Antiquity. Marco Polo, Colbert, and Hamilton are, in a way, the first consultants. But modern Consulting originated in Europe at the end of the 19th century during the second industrial revolution. The Consulting Industry has always followed the trends closely both in management theory and technology. However, the specialization and segmentation of the Consulting Industry continue to scatter the market. Each region evolves at its own pace depending on the maturity of both buyers and sellers of Consulting Services.

“Consultant” is not just a fancy name, but a professional who can make a difference in how a company addresses challenges and succeeds. A simple definition of a “consultant” could be the following: a provider of expert advice to another person or an entity compensated for their services.

How old is Consulting? We are not exactly sure, but the evidence of the first Consultants offering advice might be traced back many centuries ago. Consultants, then, might not have been called “Consultants,” and Thought Leadership could have been words of wisdom and guidance. But, as this ancient quote by Homer to Achilles (in the Iliad dating back from 750BCE) suggests, a great leader can inspire his followers and lead by example:

“Be both a speaker of words and a doer of deeds.”

Modern Consulting generally follows the Economic development starting in the 19th century, and it has been shaped by it in profound ways. Management consulting sprung out of the need to help businesses improve their performance.

The History of Consulting is holistically intertwined with the growing needs of businesses, shaped by industrial developments worldwide.

Businesses needed expertise and independent perspective to help them achieve their goals, improve Strategy, streamline processes, increase sales and profitability, and many more, and Consultants perfectly delivered in their role of Independent contractors.

The contemporary phase of the History of consulting started in the late 19th century and early 20th century, when the first need for Work Rationalization emerged and is generally viewed as the beginning of professional Consulting as we know it today. The need for expertise in organizing people, processes, and machinery gave rise to creating the first management consulting firms.

Among the main factors for the creation of Management Consulting are the increased need for Efficiency in Operations, and the leverage of the specialization theories of Taylor and Babbage, Arthur D. Little (1886) started as a general management service and later specialized in technical and management engineering. They were the first to introduce “scientific management.”

These methods would allow companies to improve the efficiency of their operations by studying and optimizing each part of an operational task.

As U.S. managers in the early 20th century scrambled for efficiency in their factories and needed ways to speed up their workers’ performance, these progressive methods were enthusiastically adopted.

Management consulting is a service directed at managers to help them make decisions. It is knowledge-intensive and independent. The work is structured as a separate project and can be conducted part-time or full-time.

As pointed by Marc Baaji, New forms of production spurred growth and more significant capital needs, well beyond the typical financial means of any given business. At the same time, the need for expertise and professional business management grew significantly.

The 3rd phase of the History of consulting started with the second industrial revolution that paved the way for growth and profitability. However, it also created many challenges that managers could not always overcome on their own, especially because investors were no longer involved in the day-to-day operations like most owners once were.

The separation between management and ownership of factories grew into chasms. Professional managers were neither owners nor entrepreneurs. Facing the responsibility of making major complex decisions, they looked for advice from consultants.

Even governments started to seek advice from consultants, whether it was the U.S. Government hiring Booz Allen and Hamilton or the French Government implementing scientific management in its defense industry.

Following the great financial crisis of 1929, The Glass-Steagall Banking Act in 1933 stopped banks from getting actively involved in re-organizations and consulting activities. However, this new law triggered rapid growth in demand for expert advice in banking, finance, management, Strategy, and organization, which boosted the consulting industry.

And one of the pioneers in the modern Consulting industry, McKinsey & Company, founded in 1926, quickly established Itself as a provider of both Accounting and Strategy expertise. While banks and large accounting firms were moving out for regulatory reasons, the firm experimented with new business development methods. For example, it leveraged its general survey of company managers to gain corporate clients.

The structure follows Strategy, according to Raymond Chandler, as a means to its implementation. From a consulting standpoint, it turns out that Strategy consulting followed the organizational efficiency version of the service. Under Bruce Henderson’s leadership, the BCG authored multiple strategy frameworks that are still in use today.

The two great examples include:

During the 1980s and 90s, the demand for Strategy and organization consulting developed rapidly. Meanwhile, the need for information technology advice and expertise grew exponentially. As a result, the number of consultants and their range of activity exploded, spreading geographically into Europe, Asia, and South America.

I.T. Consulting and the Big Accounting Firms mark a major development in Consulting.

Computer technology and its wide adoption in economic and business terms ushered in a new consultancy field.

I.T. consultancy became an important new niche. However, computer manufacturers were prohibited from offering their expertise due to antitrust concerns. As a result, I.T. consulting developed independently, offered by outside vendors. It led to the creation of EDS (Electronic Data Systems) by Ross Perot, a former IBM employee.

The Big Four, who were The Big Six at the time, swiftly diversified beyond accounting and auditing into consulting. Seizing an opportunity to grow their consulting market share, they populated the I.T. Consulting niche market, helping clients, among other things, to implement enterprise resource planning (ERP) systems all over the world. By mid-1990, they became larger than most other consultancies. Most of them ended up splitting as a consequence of the Enron Scandal.

I.T. consulting can be considered the largest and fastest-growing segment of management consulting depending on calculation methods, with only operations excellence coming close.

Business excellence as a concept sounds really exciting, and we can thank  McKinsey for being the first who introduced the idea of ‘scaling up’ success through excellence in the 1980s. Leveraging the work of Peters and Waterman from the book  “In Search of Excellence,” McKinsey introduced the 7-S framework.

Also inspired by Nadler and Tushman’s Congruence Model and Galbraith’s Star Model – this framework served as the foundation for linking Strategy, organization, and culture. First, it identified competencies and, later, capabilities as sources of competitive advantage.

Today, McKinsey & Co continues to be a Consulting industry leader. Since the mid-1990s, the company offers Operations Excellence programs, and most large consultancies have embraced the same offering to the point of commoditizing it. Moreover, today’s increasingly competitive environment requires true excellence for entire processes from A to Z. Think excellence in manufacturing, excellence in R&D, excellence in marketing and sales, …. you name it.

For consulting firms that were previously leaders in one field of management consultancy, it is always challenging to establish a similar position in a new field. It isn’t easy to diversify. The more logical approach is specialization by capability and by industry sector. It has been a major factor for Management consultancy branching out into several specialties:

Besides this segmentation, Consultants also began to focus more on specific industry verticals.

So the History of Consulting is still ongoing. As clients have started to better understand what value consultants can bring them, many changes will shape the future of the industry: Brexit, Covid, remote working…

For instance, unless you have inherited the same perception skills as Tom Cruise in Oblivion or Jim Carey in the Truman Show, you have probably noticed that everyone speaks about embracing Digital. Consultants have clearly identified this wave and strategy consultancies, the big 4 (they are back), I.T. consultancies, and even media agencies collide at full speed. But that’s another story.

That’s it for today. Next time, I’ll answer the question: “Working with large consultancies: stop or encore “.

In the meantime, if you have any questions, or want to learn more about what we do at consulting quest, just send me an email at helene.laffitte@consultingquest.com

You can also have a look at our website smartconsultingsourcing.com to know more about our book and download free templates & guides to improve your consulting sourcing.

Bye and see you next week! Au revoir!

Podcast | How the top 5 spending industries are leveraging consultants?

In today’s world consultants strive to stay on cutting-edge of knowledge by evolving and enhancing their expertise. Clients get the best out of the consultants but even consultants are benefited by this as they get to build better portfolios and ensure long-term success.

Blockchain Beyond Currencies | This Week in Consulting

Blockchain technology empowers organizations to reimagine a world in which all forms of transactions are done safely, permanently, and efficiently.

What is the value for a consulting project? Are procurement and business leaders talking the same language? Are we talking about savings? Cost avoidance? Or is it the impact of the project on the business?

Hélène Laffitte, author of "Smart Consulting Sourcing", shares actionable ideas you can use to create more value when buying consulting services.
Hélène will share concrete examples and best practices from Fortune 500 companies and will address:

✅ Insights about when executives are choosing to use consulting firms

✅ How stakeholders contribute to the sourcing process